The tour of Madrid began with a visit to this historical market near Plaza Mayor. The market represents a historic cultural destination for the residents of Madrid that had become run down and unused in recent years. The refurbished market now represents a rebirth of the traditional market cultural and a place to show oἀ the food and culture of the city.

The initial structure was preserved and although the food stands have a new contemporary feel, the experience of being in the market gives great exposure to local residents and an understanding of the lifestyle of those who live in the city.

The previous headquarters of a large Spanish phone company has been transformed into a cultural center in Madrid.

The Fundación Telefónica is now  a cultural center and the home of exhibits of science and the arts. The exhibition on Nikola Tesla oἀers an opportunity to observe the career and mind of one of the greatest scientists of the 20th century whose work has contributed immensely to the lifestyle that is so “normal” today.

Additionally the exhibit that features Ferran Adriá and the study of the creative process behind his culinary career offers an opportunity for the public to see inside the mind of one of the most innovative creative thinkers of the culinary industry.

Many may take for granted the science and imagination necessary to invent such unique dining experiences, however the food becomes even more beautiful when the process if understood. This is not unlike architecture in that the creative process is far more extensive than what a passer by may experience, but with the context in plain view, the work is even more impressive. 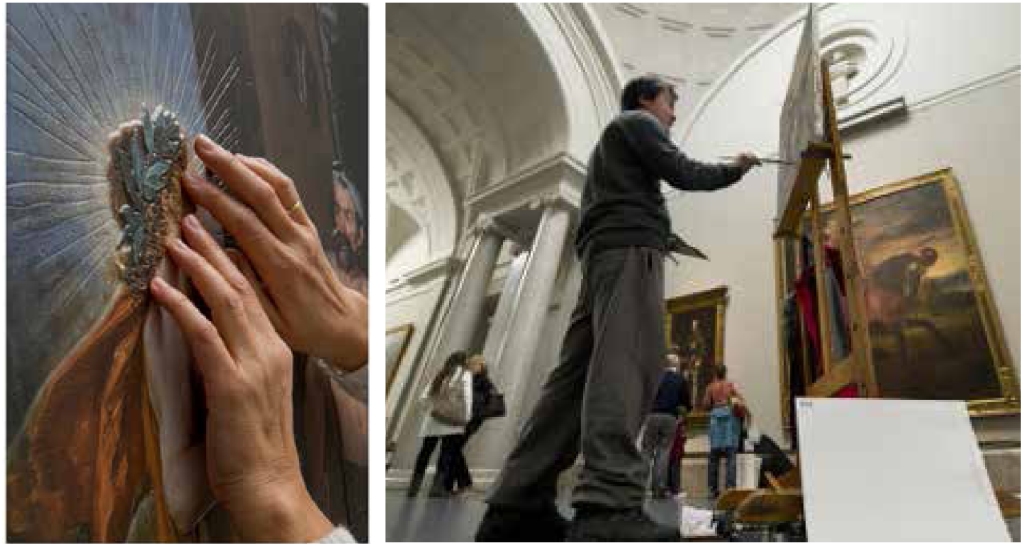 The classical art museum in Madrid, the Museum del Prado is currently offering an exhibit aimed towards sharing the visual arts of its collection with those who are visually impaired. The exhibition has taken six works from diἀerent eras and is allowing them to be touched in the hopes that those who cannot see the works may be able to gain a mental recreation of the work and hopefully gain an emotional connection to the work. The exhibit is not intended solely for the visually impaired but features 3D imagery, text in braille, audio-guides, and even opaque glasses for the non-impaired to gain a similar experience.

While in Madrid, we visited the Royal Palace of Spain and one of the greatest examples of Spanish Baroque architecture.

We experienced the overwhelming and intricate decoration of the interior and were able to look into the past lives of the Spanish Royalty.

The students  visited an example of a renovation project much related to their studio work. For the Media Lab Prado, the building was a former wood factory that had been transformed into a digital and project production space with an additional structural that reflects the modern age through its use of color and material.

For the first part of this museum tour, the students visited the terrace of Reina Soÿa.  This space allowed the students to see out over the city and observe the new, modern addition attached to the old museum structure.  The second part of the tour included a viewing of Pablo Picasso’s La Guernica.

Since it was the last day in Madrid for the students, they were treated to a trip to the famous Madrid flea market.  Some items in which the students purchased included tapestries, scarves, shoes, socks, pastries and more.  The flea market has been around for approximately 60 years and is still thriving!

The center of the catholic church in Spain, the cathedral in Toledo did not disappoint. A masterpiece of the Spanish Baroque, it reflected the his­torical diversity of the Spanish people by incorporating architectural elements such as the geometric designs of the muslims, traditional gothic elements, and scenes depicting the patron saints of Spain and Toledo.

While in Toledo we were able to meet Mariano Vallejo and learn about what he and his firm do in Toledo and else­where.

We toured one of their earlier projects, the six patio-houses, which brought to mind the objective of our studio project at the BAC. Their proj­ect centered on creating improved housing on a pecular site, and making the building new and interesting while preserving the historical integrity of the surrounding area.

View all posts by bacprogram

BAC is on COAC’s Agenda Arquitectura!